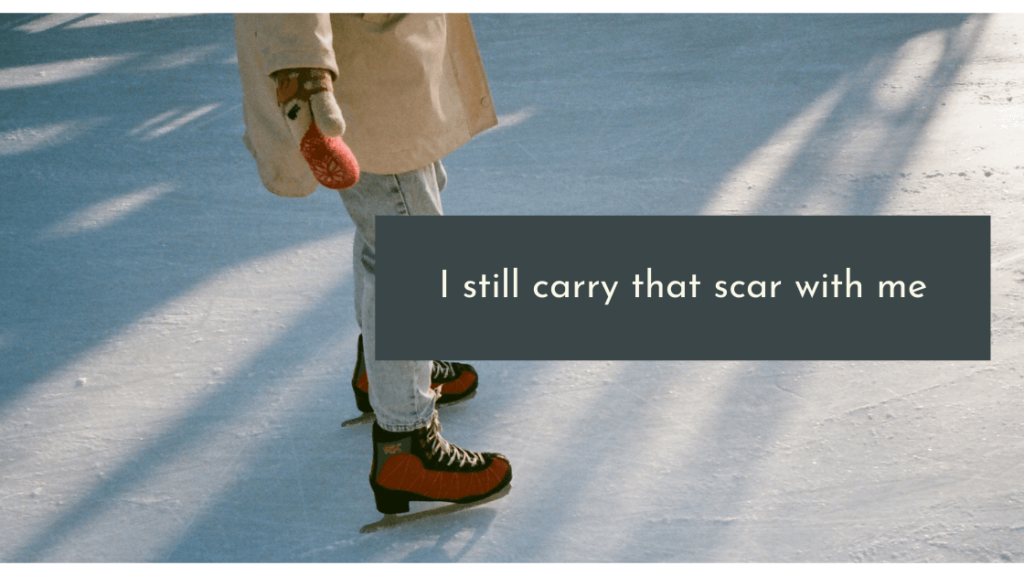 It was freezing cold. One of the rare winters where I got to be outside on the ice. Skating. I loved it. The feel of effortless moving. Of gliding and feeling free. The cold didn’t hurt, and I loved every second of it.

I wasn’t alone. Eight of my friends were there too. I don’t think they experienced the same freedom. One after the other took a tumble on the ice. Some were almost spectacular. But I didn’t.

For someone who trips over stickers on the floor, I had a good balance on skates.

“You need to fall too”, one of my friends said.

I didn’t see the point and wanted to keep on gliding.

But they insisted. Persisted. Until I gave in. I didn’t like to be the odd one out. I never fitted in, and I didn’t want to do it now. But, if it would make my friends happy, I would fall. I so I did. Mid glide, I dropped myself to my knees and pretended to fall. Not wanting to be special and by not falling.

They laughed and cheered, and I was allowed to keep on gliding. I can still remember the cold. And the need to keep doing my own thing. Not let them dictated where I needed to be, while all I want to be was on the other side of the ice than they were.

But later that evening, we were eating fries before heading to the swimming pool, I felt my butt itch. Something stung, and I fought the urge to scratch, to touch my but and invoke another bout of laughter at my expense.

I excused myself to go to the loo and found that my jeans were stained with dried up blood around a hole in the fabric. Right in the middle of my butt. The back of the ice skate went clean through everything, but it had been too cold to notice. Too cold to even feel it as the sharp skate plunged into my left butt cheek.

I carry that scar with me still. No one sees it, but it’s a reminder that friends don’t always have the best intentions for you. That peer pressure is not always a good thing. And that being friends with someone at 15 doesn’t mean that they are nice to you, like you or that it will stay that way.