I grew up singing songs, usually during the dishes or in the car. Whenever we would drive somewhere, my dad would turn up the radio and start singing along to songs. So naturally, we followed. We didn’t care about being good or anything else. What mattered was that we were singing songs together at that moment.

I remember one moment where my dad drove me to France at the end of June. It was warm, so we had the windows of the dark blue Volvo rolled down. They were the kind of windows you had to roll down manually. It feels like that was ages ago, but it was no more than ten years.

As we were driving through the countryside, we were listening to our mp3-mix that we had burned on a cd. Dust in the wind by Kansas came one, and we both sang from the top of our lungs. The wind in our hair, the sun on our face, and good company. At that moment, I felt rich, happy, and so lucky to experience that moment. When I think of that trip, that moment defined it all.

Singing became something we did in our family. Not on stage and I hardly sang in front of other people, unless they were in the car with me. Most of all, singing became something that calmed me down. Whenever I was driving, and things to a little hairy or I was nervous, I turned up the radio and sang. It made me focused, grounded and present in the moment.

For all the good things it had brought me, I stopped singing. I stopped doing it at home while I was cooking; I stopped singing in the car with my dad. The only time I sang was in the car, on my own, as a safe place to let all the emotions out. More often than not, that became the place where I allowed myself to feel, to cry and scream at the music. Those few minute rides every week became my new safe.

Suddenly I caught myself dancing in my living room wearing Miffy socks that smiled at me. I found myself sliding up and down the living room dancing as if my life depended on it. It was at that moment that I felt the urge to sing.

Songs have a way of making us feel things even if we’re not ready to feel them. I always thought my mp3 player had a cruel sense of humour, giving me the songs that were more confrontation. But now I realise that when all the walls are up, music sometimes is the only thing that can get through.

And all you’ve got to do is decided whether to sing or not. 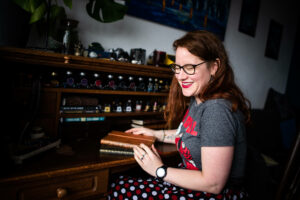